After my last make, the fail posted about here, I told myself that I was done for a while with bra making. When I woke up the next morning, I set about to find my next up project and was sucked back into these addictive little creatures…BRAs! I’m telling you they are addictive. I had been cleaning up the bits and pieces trying to put them away as reusable pieces and found a bra I had started a couple of months ago. It is the DL01 by MakeBra. It is a cut and sew foam cup number that has been reviewed and blogged several times that shows to be well fitting and flattering all the same. All that was left to do was to apply the neckline and underarm elastics and hardware. So I finished her. It fit! That is the the culprit that put me in the bra-maker’s vortex! 🙃

Another bra I had going was the Elan bra, a padded-horizontal seamed lace cup with front closure. I finished her as well…I had only gotten one cup finished before putting it away so it took a bit of time to get it done. Fit not so good, it was too small. I was frustrated at the lack of instruction for selecting my size and even tried emailing the pattern maker, I believe FabricDepot.com is the maker. I probably won’t make this bra again due to the fact that you use fusible fleece for the padding and it’s just too many steps to create a bra. Sorry no pic, I trashed it too fast.

Now for the crime-de-la-crime! My beautiful T-Shirt Bra.

Here is my review, it’s the same one I’ve posted at PatternReview.

Pattern Description:  from the website
Amanda and Alyssa Foam Cup Pattern , PB-1014
The first pattern of its kind in the world! Yes, you CAN make your own seamless cup t-shirt bras using our Angled Foam cups (MA series) or the Push-up Angled Foam cups (MP series). Two styles to choose from from in one envelope – either all fabric cups (Amanda) or lace cups (Alyssa). Both views have a fabric frame. Pattern is bilingual English and French.

We also sell a kit KM-33 with the fabrics pre-cut for the Amanda pattern. Please see the Kits & Bundles section of this website. To do the Alyssa, you would also need a piece of lace.
Pattern Sizing:
Complete size range from cup size 32 (32B) through to cup size 52 (42E) in one envelope.
Selecting your size is done a bit differently than her other patterns, but is well explained in the directions. As it turns out, I used a size 34 frame/cup and 30″ band.

Did it look like the photo/drawing on the pattern envelope once you were done sewing with it?
Yessss!

Were the instructions easy to follow?
This is subjective…if you have seen a few bras and have a solid understanding of how a bra is constructed, they are well written. I would not recommend you try it without the added support from Beverly’s Craftsy classes. I have all three of them, and I referred to all of them during making of this bra.

What did you particularly like or dislike about the pattern?
I am so proud of how RTW it looks as well as the terrific fit.

Fabric Used:  I have a rather good supply of bra/lingerie fabrics and bits. However, since this is my first go at a pre-formed foam cup bra I bought the kit available at Sweetcups online. In hindsight…it was a rather pricey decision.
Duoplex for the frame and straps
Power net for the band
Pre-formed angled foam cups, MA (regular, not push-up)
Underwire from The Emerald Studio, France 36
Various elastics and hardware from the small findings kit at Sweetcups

Pattern alterations or any design changes you made:  I didn’t make any fit changes, but through my haste, I forgot to attachÃ© the straps I made from the pattern and needed to make my own straight straps. They attach to the underarm elastic that is looped to hold a ring and was a technique in one of the classes.

Would you sew it again? Would you recommend it to others?
I will most definitely sew many more and I do recommend all who want to make their own bras to give this one a go!

Conclusion:
I love the smooth silhouette of a foam cup and will vow to never by another overpriced bra again.

Okay…here are some more pictures, I’ve tried to use some discretion since posting my boobs on the web feels a little weird 😳. I even asked my husband if he was okay with it…after all it’s not much different than galavanting around the beach in a bikini! Amiright?

Thanks for reading!  Until next time,

5 thoughts on “Tickled Pink! I’ve made a T-Shirt Bra” 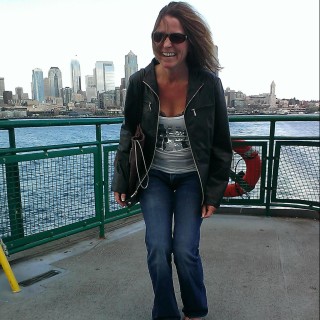 Welcome to the adventures of a mostly self-taught sewist and her 3 cats.